Almost one-hundred people gathered for lunch at the Principal's Bungalow celebrating the return of the pre 1960 Leavers. Many wives also attended, as well as some on behalf of their husbands. It was a superb occasion filled with stories and a rekindling of old friendships. The Principal spoke briefly about the school, while the President of ACOBA Mr. Shajahan Ayub paid tribute to the remarkable life of Prince Malik Ata who passed away only days before the event. A brief tour of the Old Building was one of the day's many highlights.

Can time perform the trick
of swallowing its own tail?
It does, on school reunions.

Pre-1960 Old Aitchisonians met
in the womb of their alma mater.
There, they recalled their birth,
that first cry at entering a new world,
the growing pains, the ache
to attain premature maturity.

They stood in the winter sunshine
and traded reminiscences,
bartered memories that mattered
only to them.
A younger generation listened in wonder,
unsure how to use such obsolete currency.
They need a different coinage now, to spend
freely, more wisely than these spendthrift elders did.

The weight of the future rests
on greener, unbent Aitchisonians now.
History bowed the shoulders
of those who years ago answered
that first roll-call. They queue again,
obedient to the summons of the final roll-call. 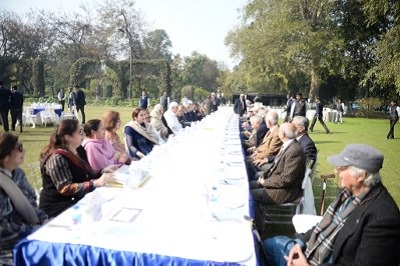 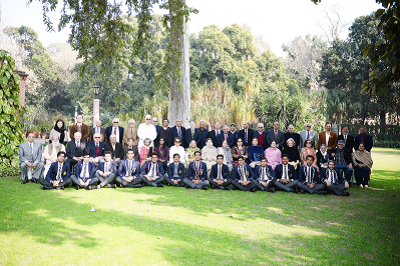